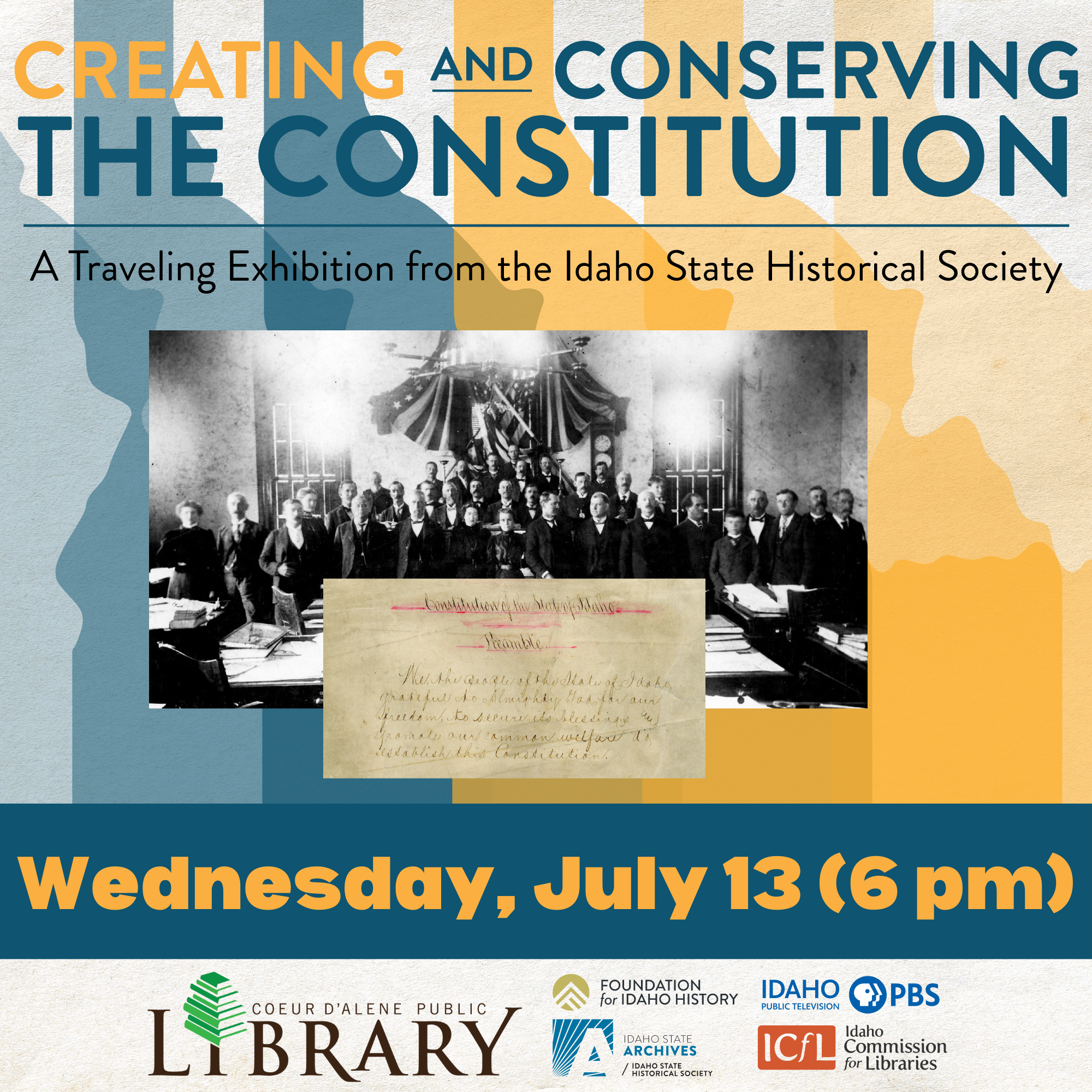 Join us for the unveiling and a presentation from the Idaho State Historical Society’s Reference Manager Elizabeth Westenburg. Drinks and snacks will be provided.

Idaho’s original constitution underwent extensive conservation work in 2019 by the University of Utah’s J. Willard Marriott Library Conservation Lab. Head of Preservation Randy Silverman was able to address several of the 132-year-old document’s issues, thanks to a fundraising campaign by the Foundation for Idaho History. The animal-glue adhesive binding had failed and most of the text block was detached from the spine, an outdated lamination treatment had been applied to the first two pages and caused warping, distortions, and red ink to bleed due to humidity, and grime and tears appeared on pages throughout the text block.

“We are grateful to community members for investing in such an important project at a very critical time,” notes ISHS Executive Director and Historic Preservation Officer Janet Gallimore. “Thanks to our partnerships with Idaho Public Television and the Idaho Commission for Libraries, we are able to share the history of Idaho’s most important founding document, while promoting the essential work of the Idaho State Archives to communities across Idaho.”

Idaho’s constitution contains 21 articles that act as supreme law for our state. Although there are more than 100 amendments, it remains as it was drafted over 132 years ago. A constitutional convention met in Boise between July 4 and August 6, 1889, with representatives from throughout the Idaho Territory debating every critical topic covered in the constitution. On October 5, 1889, Governor George Shoup issued a proclamation calling for an election on November 5 to ratify the document. Fred Dubois, Idaho’s territorial delegate to Congress, propelled the admissions bill for Idaho’s statehood, which the House passed in April 1890 and the Senate that June. Idaho became the 43rd state on July 3, 1890.

Creating and Conserving the Constitution will make its first stop at the Community Library in Ketchum, launching with a public program on April 28. The exhibit will be on display from April 28 to June 25. The exhibit will then move to the Coeur d’Alene Public Library from July 14 to August 26. For information on the tour schedule and public programming surrounding the Idaho State Constitution and to view an online collection of photos and documents, visit HISTORY.IDAHO.GOV/CONSTITUTION.

The Idaho State Historical Society is an extraordinary system of cultural and historic resources comprised of the Idaho State Museum, State Archives, State Historic Preservation Office, and Old Idaho Penitentiary and Historic Sites Program. Our vision is to make history essential and accessible through dynamic and gratifying services that inspire, enrich, and engage all Idahoans. Learn more at www.history.idaho.gov.