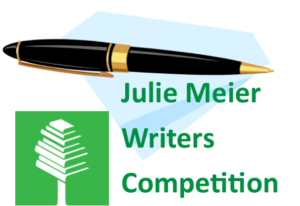 The Writers Competition at the Coeur d’Alene Public Library is one of the oldest and most prestigious contests of its kind in the Inland Northwest. In 1987 Library Director Julie Meier perceived the need to discover and recognize talented writers in our regional community and to challenge young people and adults to take an interest in writing and to hone their skills. Another goal of the Writers Competition is to reveal great authors living in our midst.

To add a tangible reward to the honor of winning the competition, Hecla Mining Company agreed to fund cash prizes for the winning entries for the first contest in 1988. Hecla continued to fund the prizes through 2001. Beginning with the 2002 competition cash prizes were funded by a grant from the Coeur d’Alene Kiwanis Club. The Friends of the Coeur d’Alene Public Library provide volunteers to organize the competition and host the annual Awards Ceremony.

The Writers Competition is judged by a group of volunteers composed of professional writers and editors working in North Idaho and Spokane.

Official Writers Competition entry forms and rules are available beginning Jan. 31 each year. Forms can be picked up at the Coeur d’Alene Public Library or downloaded by clicking this link. Requests for mailed forms must be accompanied by a self-addressed, stamped envelope. Entries must normally be returned to the Library by March 31. Judging is completed by the end of April and the Awards Ceremony is scheduled in May.